After Goddess Sati did sati in order to save her husband Mahadev’s reputation, Mahadev could not bare separation from Sati hence he went on to sivere depression. But we are not humans, we are souls and souls are immortal. It leaves one form and takes another form and Sati or Parvati’s soul was the soul of Adi-Shakti. It left Sati’s body and got into Parvati’s body.

With a lapse of time, Sati’s soul took birth as Parvat Raj Himawan’s daughter Parvati. Since Parvati was the incarnation of Sati so since by birth only she was devoted to Shiva. Though she was born into a Vaishnav family but still, she remained to be a devotee of Lord Shiva. Ever since Parvati heard Shiva’s name, she fell in love with him. She wanted to marry him since then. At the young age of 9, Parvati decided to propose Lord Shiva for marriage. “But how can a 9year old girl fall in love with someone whom she had never met?” thought her father Himawan when she told him about her desire to get married to Shiva. He laughed thinking she was a child and said “but to marry Shiva, you will have to know him first. How can you marry someone whom you haven’t known? Love is okay but it is really important to know and understand the person.” “But how will I know him? He is busy in his samadhi, I cannot go and talk to him, ask him about his favourites” asked disappointed Parvati. Just then, Dev Rishi Narad appeared and chanted “Narayan-Narayan. Devi Parvati, may you be blessed by the man you desire and I shall help you knowing Mahadeva.” Since that day, every day Narad Muni came and sang Lord Shiva’s tale to young Parvati. He also told him about Devi Sati. Parvati never felt any hate or jealousy towards Devi Sati for she accepted her as Mahadeva’s past.

After learning too much about Mahadeva, one day young Parvati expressed her desire to visit him. Narad Muni took him along with himself to Kailash and thankfully, Mahadeva was on a break during that time from his samadhi. But who knew that young Parvati would propose Mahadeva for marriage. Mahadeva looked angrily at her foolishness for he did not know that she was his Sati’s incarnation only. “You are just a kid, you wish to marry me. Go play with your dolls. I am hermit” said Mahadeva. Parvati got really disappointed with this rejection but still she was firm at this decision to marry Shiva.

One day, while doing her random stuff, Parvati got an idea to stop using all the luxurious stuff and live life like Mahadeva. Young Parvati of around 10 years old left her home and started living in forest. She used to spent her days eating only fruits. But still, Mahadeva was not satisfied. Still, he could not see her true love for him.

Time passed and now Mahadeva started getting irritated from her and hence, he started taking her test. Once, he told her to make 101 Shivlings with wet mud within one hour. Parvati successfully made all those 101 shivlings. Mahadeva was shocked to see that hence, just to get rid of her he destroyed the last one. But, Parvati again made it. Seeing her true love and devotion, all the gods and goddesses decided ti help her win Mahadeva’s heart. Even Nayrayan also. According to the Purans and religious text’s, it is stated that it is toughest to win Narayan’s heart and easiest to win Mahadeava’s heart. But in this case, it was opposite. The toughest Narayan decided to help her and was impressed by her true love and devotion towards Shiva but the one who is known as Bholenath was not.

Now, Mahadeva was fed up of her hence, he decided to go for a deep samadhi. Parvati started panicking and went to her brother by heart Narayan. They had only two options to break Mahadeva’s samadhi. One by sending the apsaras and seducing him and the other which Parvati did not wanted to do as it could cost someone really dear to her’s life. It was by sending Kama Dev, the son of Lord Vishnu and Mata Maha Lakshmi and the lord of love to shoot with his sugercane bow and break Mahadeva’s penance. Parvati did not wanted Lakshmila to become childless but it  was destined… Lakshmi had to sacrifice her dear son for Parvati  http://www.shubhiagarwal.in/why-cant-goddess-parvati-become-pregnant/

Kama Dev was burnt into ashes when Mahadeva opened his third eye. Finally Mahadeva broke his penance but still, he did not even looked at Parvati. Seeing their daughter suffering too much, Parvat Raj Himawan and his wife Mainavati pleaded to Mahadeva to at least just look at her but he did not. Parvati did not got disappointed. Now she was used to it.

People may consider it as her obsession towards Shiva that the one who does not even look at her, still she was mad for him. But if they do, they are wrong for this is only true love and faith.! Parvati had faith in her love for Shiva that if her love is true then at the end, Shiva would be hers. Though he was her spiritually but physically also.

Now she decided to give up on food and water and started eating grass. But still, Mahadeva did not got satisfied. Parvati did this for many years. But, nothing happened.

And then, finally at the age of sixteen, Parvati go frustrated and decided to do a tough penance standing on one feet for Shiva. He tough penance continued for 3000years. Tsunami, floods, landslide, many things came but Parvati did not get distracted and then finally, her penance was coming to an end, lord Shiva came disguised as an old man but Parvati knew it was her Mahadeva hence, she opened her eyes and asked him to come in his real form. Mahadeva came in his real form and finally her penance came to an end, he finally accepted her as his wife. “Finding a woman like you is rare in this universe, I am really sorry my love for not understanding your love. One is really blessed if he gets a wife like you. From now onwards every girl who offer prayers to you and has the same kind of love and devotion towards the one they love and admire shall be blessed by you. If you think that her love is true towards him as yours towards me then you may bless ” said Mahadeva accepting her as his wife.

Aditya Hriday Stotra- The Most Powerful Mantra In Hinduism

Wed Apr 21 , 2021
Mantras play a very significant role in Hinduism. There are several mantras chanted by most of us to get several benefits like Gauri Stuti, prayer […] 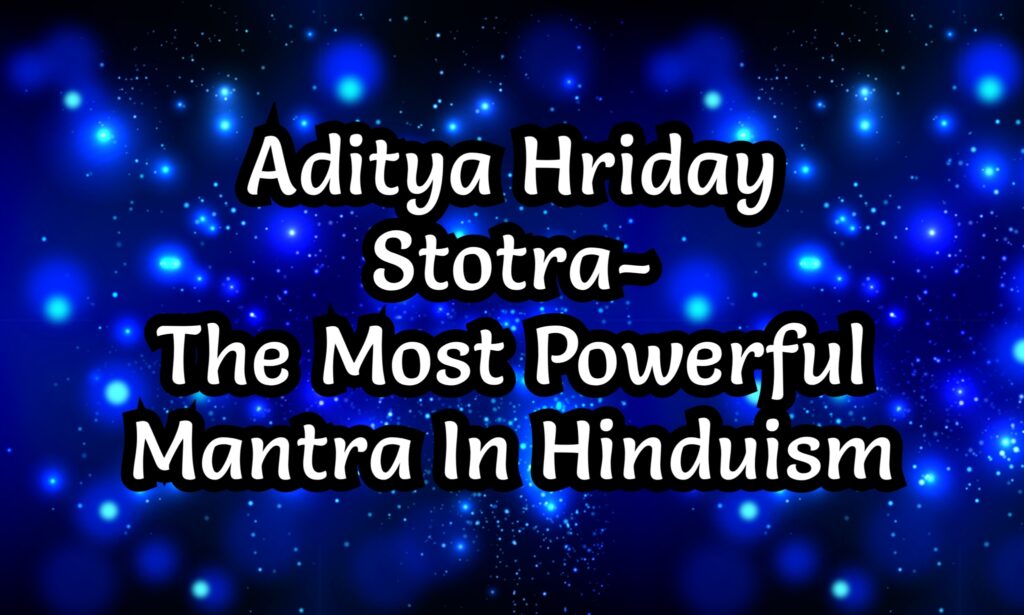