Oh, I am fed up listening praises about him from everyone except my brother Rukmi.

Oh, what’s so special about him I wondered as I lay on the couch in my chamber. I closed my eyes and took his name KRISHNA. A flush of red colour rose on my cheeks as I took his name.

Oh so he started his magic upon me also I wondered? And continued thinking about him as told by the sages and my dear friends from Mathura. How could be someone mischievous and serious both at the same time? I wondered as they told me that he loved flirting with women and he was the only one who killed Kansa

I could not resist myself and took out my painting board and some colours to think and draw his portrait.

As I stood near the painting board along with a paintbrush in my hand, I painted what my heart said about him,

Lotus eyes which always had a mischievous attitude,

Hands which were always ready to steal the clothes of the gopikas bathing in the lake,

A slim clean shaved face which was always ready to be caressed by Maiya Yashoda,

A thin stomach which was always ready to store Makhan inside it,

A flute whose tune invited everyone to the dance floor.

And the peacock feather which stole my heart forever.

Oh, what did I say? I realized as I heard my dear friend Prabha saying “And a heart which only loves our Rajkumari Rukmini.” I could not resist myself and just blushed as I was in love with him.

I never saw him, never met him, never heard his voice but still, I was in love with him. How did it happen? I asked myself. Because you are the incarnation of Lakshmi and he is of Narayan and Lakshmi-Narayan cannot stay away from each other said my dear father Bhishmak entering. What really? I ask him? as I ran to his arms. Yes, my daughter, you are Lakshmi. That is why you share a deep connection with him he said. I still could not digest the fact and ignored it as now I want to marry my Krishna as soon as possible. But what about brother Rukmi? Will he be happy with my decision? I wondered.

As soon as brother got to know about him, he warned me to stay away from him. But how could I for I love him so much? I tried to explain it to him but he ignored it. Without my permission, he forcefully fixed my wedding along with that foolish King Shishupal of Chedi. Oh, I hate him, I hate him so much I said to myself. My brother hated Krishna because Krishna killed Kansa and Kansa was Jarasandha’s best friend and Jarasand’s daughters were Kansa’s wives and now they became a widow. Jarasanda and brother Rukmi both wanted to kill Krishna but it was not possible until I was alive. I said calming down myself.

As each night passed, my love for Krishna grew more. I started loving him more and more that I could not live without him. Was I desperate to have him? I wondered and started painting his Peacock feather again. By now my chamber was filled with my Krishna’s paintings. I was never a great painter but when it comes to him, I can do anything.

Few of my cops informed me that Krishna found a new city of Dwarka which was built by the Engineer of gods, Lord Vishwakarma himself and now the people wanted him to become the king but he could not for he was not married yet and Balram dau, he married sister Revati but he did not want to sit on the throne as he had a short temper. I guess now it was the time for me to take a step ahead.

After a few days, there was my wedding along with King Shishupal whom I disliked to an extent!! As the rituals began, his lust rose and one day while no one was around he touched mine on my shoulder. Oh, I wanted to kill him that day only but could not for I want my Krishna to kill him. I complained to brother Rukmi about what Shishupal did with me and he said that I was his property. He could do anything with me. Huh! I was so much hurt my this reply as is brother Rukmi never considered me as his sister. How dare he think so.! Since then, I started hating my brother too. Was I a thing to be sold to someone? How come he had rights on me before my father performed my Kanyadaan? My father was alive but he could not do anything as brother warned him that if he would do anything then he would kill both of us. My father was afraid to lose me and he kept silent and tolerated him. But now, it was enough. I could not handle it anymore! 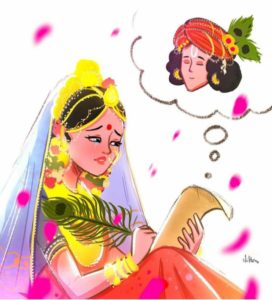 Oh the beauty of the worlds, having heard of Your qualities, which enter the ears of those who hear and remove their bodily distress, and have also heard of Your beauty, which fulfills all the visual desires of those who see, I have fixed my shameless mind upon You, Oh Krishna

Oh Mukunda, You are equal only to Yourself in lineage, character, beauty, knowledge, youthfulness, wealth, and influence. O lion among men, You delight the minds of all mankind. What aristocratic, sober-minded, and marriageable girl of a good family would not choose You as her husband when the proper time has come?

Therefore, my dear Lord, I have chosen You as my husband, and I surrender myself to You. Please come swiftly, O almighty one, and make me Your wife. My dear lotus-eyed Lord, let Shishupala never touch the hero’s portion like a jackal stealing the property of a lion.

If I have sufficiently worshiped You by pious works, sacrifices, charity, rituals, and vows, and also by worshiping the demigods, brahmaṇas, and gurus, then may Gadagraja come and take my hand, and not Damaghoṣa’s son or anyone else.

Since I will be staying within the inner chambers of the palace, You may wonder, “How can I carry you away without killing some of your relatives?” But I shall tell You away: On the day before the marriage there is a grand procession to honor the royal family’s deity, and in this procession, the new bride goes outside the city to visit Goddess Girijā.

O lotus-eyed one, great souls like Lord Shiva hanker to bathe in the dust of Your lotus feet and thereby destroy their ignorance. If I cannot obtain Your mercy, I shall simply give up my vital force, which will have become weak from the severe penances I will perform. Then, after hundreds of lifetimes of endeavor, I may obtain Your mercy.

The letter got wet with the tears flowing through my eyes. Will my Krishna realize my love for him? Will he come I asked myself. Yes, he will say my heart. I wrote the letter and gave it to one of my cops to hand it over only to Krishna.

After two days, my cops came back and said that Krishna would come. I danced with excitement, tears continuously falling through my eyes. Yes, my love won. But still, the problem was not over as brother Rukmi did not allow me or my father to step out of our chambers. Somehow I convinced brother that Girija Devi was our Kuldevi and her blessings were important. At last, he got convinced and sent me to the Girija Devi Temple along with the army. I took nothing from my home, just the peacock feather, and rushed towards the temple.

Oh, dear daughter of Himawan, supreme asceticism Girija Devi bless me with Krishna as my husband just like you blessed Sita and Urmila. I cried in front of her. The flower of Girija Devi fell upon me and heavy winds started blowing. I could realize that my love was here, my lord, my Krishna was here but still, I became shy and could not turn back. Rukmini he called me out with the most melodious voice ever. I could not believe that my love was here and asked him to take my name once again. Rukmini, Rukmini, Rukmini he started saying endlessly. He held me by my shoulder until I turned back. “Why are you shying away from me, my dear? I thought that the woman who wrote the first-ever love letter of the Brahmanda might be a fierce person”? He teased me. My tears said an each-n-every thing I wanted to say. I could not control myself anymore and hugged him tightly. Oh my Krishna I am yours, only yours. I cried. He hugged me back too and wiped my tears. I wish the time could stop there only. I wanted to live that moment forever, throughout my life. But brother Rukmi was waiting for us out there. Krishna filled my hairline with the vermilion in the temple and accepted me as his wife. 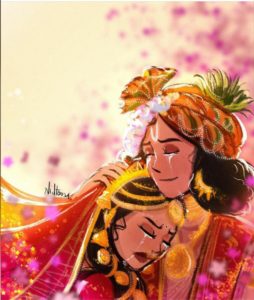 After sharing a few moments of love, we both together went out and faced brother Rukmi, Shishupala, Jarasanda, and their army. Far away I could see that Balram Dau was coming with my father in a chariot. Krishna, Balram Dau had a tough fight with the army and somehow we tried to escape from there but still, it was Brother Rukmi who was after our lives. He cursed me to be get separated from my love. At first, I got anxious but then when I looked at my husband’s lotus eyes, my anxiousness calms down. My husband lost his patients when Rukmi started speaking ill about me. That was the time when his Sudarshana Chakra appeared in his hand and was about to behead brother Rukmi. But I stopped him because I did not want to see my brother dying with the hands of my husband. I begged my love to leave my brother. Though my husband wanted to kill him due to my request, he just shaved his hair and beard off.

And then finally, brother Rukmi apologized and we started heading towards Dwarka where our grand wedding was supposed to be held.

Soon our wedding was held and then onwards Krishna became mine and I became his. 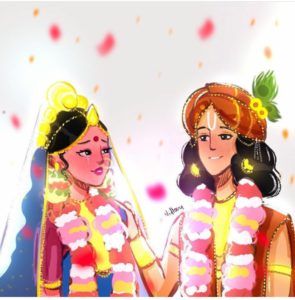 In Dwarka, I not only got Krishna as my husband but also Didi Revati who is just like an elder sister to me and Mata Devki the one who showered her love upon me and didi endlessly. I and didi were motherless, our mothers died when were young but it was Mata Devki who fulfilled that empty place of a mother.

Indeed, Krishna is magic. He was the best thing that happened to me!

One thought on “Krishna, Through Rukmini’s Eyes”

Fri Jun 19 , 2020
Like in Mahabharath, Arjuna, Bhima, Nakula, Sahadeva, Yuddhishthira, Draupadi, Subhadra etc. Were the parts of some or the other Devas like Arjuna was of Indra […] 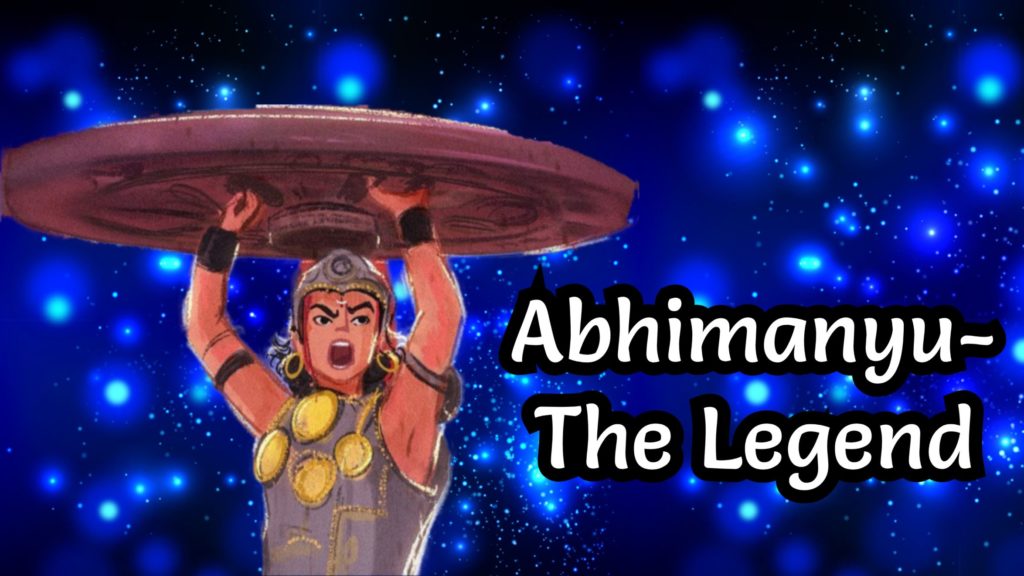