Shubhi Agarwal
Like in Mahabharath, Arjuna, Bhima, Nakula, Sahadeva, Yuddhishthira, Draupadi, Subhadra etc. Were the parts of some or the other Devas like Arjuna was of Indra Dev, Bhima was of Vayu Dev, Nakula was of the first Ashwin twin Natsya, Sahadeva was of the other Ashwin twin Dasra, Draupadi was of Devi Sacchi (wife of Indra Deva) and Subhadra was of Devi Yogamaya a form of Devi Adi-Shakti i.e. Devi Parvati or Devi Sati. The same goes for Abhimanyu, Abhimanyu was the incarnation of Vacchra, son of Chandra. And was born to Arjuna and his third wife Subhadra. Abimanyu was a legend, he comes under one of the greatest warriors of Mahabharath. But all credits goes to his elder brother cum teacher Pradumana, the eldest son of Krishna and Rukmini. Pradyumana started training his cousin since the day his cousin became capable of holding heavy weapons. Pradyumana was too one of the greatest warriors of the Dwapar Yuga. Rather than Pradhumana, Balaram and Krishna too taught their nephew. After lots and lots of training, Abhimanyu turned out to be the most powerful and the youngest warriors. At a young age of thirteen, he learned to use celestial weapons. At the age of 16, he got married to Uttara, the daughter of Virata. Abhimanyu could just live only four months of a happily married life and that too, most of the time he spent in discussing the war tactics with is elders. And then, the Kurukshetra war happened and finally, on the thirteenth day of the war, Maha Kaal came to take Abhimanyu along with him. The death of Abhimanyu may still leave everyone with tears in their eyes. But his death was destined for the promise all the gods and goddesses made to Chandra Dev. Chandra Dev was really very much attached to his son Vacchra. Just like Maharaj Dashrath to Lord Ram and Lakshman. The time when the Lord Vishnu asked Chandra Dev to let his son Vacchra incarnate on Prithvi then, Chandra Dev did not grant him permission to take Vacchra along with him for he could not live without him even for a moment. But finally, Chandra Dev agreed but with a few conditions. And according to these conditions only, Abhimanyu died at the age of 16, Abhimanyu’s son Parikshit became the king of Hastinapur after Yuddhishthira, he was more famous than Draupadi’s sons. And there is no doubt that Abhimanyu was one of the most powerful warriors amongst the Pandavas. He broke Maha Mahima Bheeshma’s bow, Abhimanyu killed many prominent heroes including Duryodhana’s son Lakshman, Shalaya’s sons Rukmanagaa and Rukmanaratha, adoptive younger brother of Karna, Shon, and many advisers of Karna, Rukmaratha, Kritavarma’s son Matrikavata, Shrutanjaya, Ashavketu (From Magadha), Chandraketu, Mahavega, Suvarcha, Suryabhasa, Kalakeya (Shakuni’s brother), Vanraja and Mrigaraja (sons of Uluka and grandsons of Shakuni), Vasatiya, and chariots from the Brahma-Vasatiyas and Kekayas, King of Kosala – King Bridhabala, King of Amvashtas and his son and many others. Abhimanyu defeated the mighty warriors of Kauravas side including Duryodhana, Dushasana, Kritvarma, Shalya, Drona, Kripa, and Karna. No Kaurava warrior could escape his arrows. Abhimanyu killed all the remaining foster brothers of Karna due to which Karna became angry and attacked Abhimanyu but Abhimanyu defeated Karna easily. Abhimanyu refused to kill Karna because he knew that his father had taken an oath to kill Karna. Abhimanyu defeated Karna four times in the war. It is said that Karna flew away from Abhimanyu. n this way, Abhimanyu defeated all the warriors. Duryodhana became so threatened that Abhimanyu could break Chakravyuha easily. Hence, a strategy was formed and a joint attack on Abhimanyu followed. On Duryodhana’s advice, Karna broke Abhimanyu’s bow from behind since it was impossible to face armed Abhimanyu. Kripa killed his two chariot-drivers, and Kritavarma killed his horses; Abhimanyu took up a sword and a shield and killed many foot soldiers with his sword. But later, Ashwatthama and Karna disarmed him. Then Abhimanyu took a chariot wheel and fought on with that. He still managed to kill several warriors. At last, many Kaurava car-warriors stabbed Abhimanyu from all sides leading to death. Warriors included Duryodhana, Dushyasana, Shakuni, Karna, Vrishasena, Banasena, Bhurishrava, Vikarna, Durjaya. Abhimanyu may have died but he became immortal for the world. He is indeed an inspiration for young kids. He was just sixteen and still, he faced so many things. He did not meet his father until he was thirteen because of the Pandava’s Vanvaas and Agyaatvaas. He was the support system of his mother Subhadra. Even Draupadi loved him more than her own sons and rest all happened in the Kurukshetra war…

5 thoughts on “Abhimanyu- The Legend”

Fri Jun 19 , 2020
The beloved princess of Hastinapur. Crown Prince Duryodhana’s daughter Lakshmana was adored since birth. Her twin brother Lakshman and she had charmed lives…but perhaps no […] 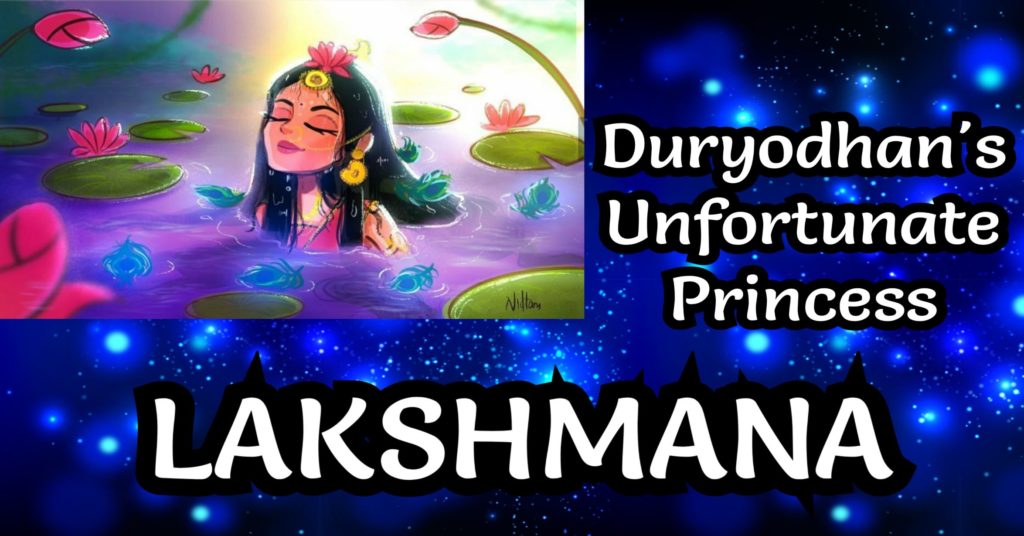