We all might be aware of the term Panchakanyas – the term given to the five iconic women in the epics Ramayan and Mahabharat – Sita, Draupadi, Tara, Ahalya and Mandodri. But do you know there is a much higher term than this? That term is known as the Maha Sati which means a very chaste woman and a virtuous wife. These women are true Pati Vrata Strees – the women who had devoted their whole lives to their husbands. There is no greater women that these. These women are always labeled as ‘Sati’ before their respective names.

She was an incarnation of Adi-Shakti who is an immortal soul energy of Mahadeva. Born to PrajaPati Daksha and his wife Prastuti. Out of his several other daughters, Sati was his most beloved one. But, Sati was in incarnation of Adi-Shakti. How could she stay away from her Shiva for long? Hence, she married him against her father’s will. The reason why Daksha did not want Shiv-Sati’s marriage was that Shiva was a hermit and Sati was a princess born in the luxuries of the palace. How could a father see his beloved princess living life which she wasn’t meant for? Sati did not care about anyone and left her fathers adobe to live life with the love of her life. She started living as a hermit. But what made her the Maha Sati?

Once her father announced for a yajna at his palace where in everyone was invited except Sati and Shiva. Sati was hurt by this. How come her father became too heartless? The wife in her was convinced of the fact that he did not invite her for now she was Shiva’s wife. But the daughter in her wasn’t. Hence, she decided to visit her father’s place despite of knowing that he would insult her. She went to her father’s place where in she was welcomed by her mother and sisters. But, this time her father crossed her limits. Instead of insulting her, he started insulting and mocking her husband. Sati could not tolerate it and decided to self-immolate herself. She gave up her life in order to protect her husband’s dignity.

“A women can tolerate anything but, never her husband’s insult. The woman who could not protect her husband’s dignity is not worthy of being called a women.” ~ Sati 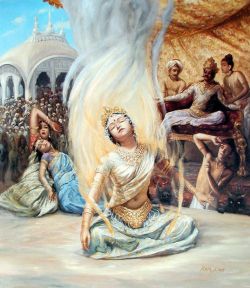 The wife of Atri Muni, Sati Anusuya has always been devoted towards her husband and her husband also believed that there was no chaste women than his wife. Once, Dev Rishi Narad started singing her praises in front of the Tri-Devi’s – Lakshmi, Parvati and Saraswati. They felt a bit of jealousy that how come on the Prithvi, there was any other woman who was more of a chaste women then them? Hence, they decided to test Mata Anusuya. They convinced their husband’s to visit her and as her to feed them ‘naked.’ The Tri-Dev also agreed to their wives as they wanted Sati Anusuya to set and example for woman. Hence, they went on to Atri Muni’s aashram when he was away from home. The Tridev asked Mata Anusuya to feed them ‘naked.’ But, how was it possible? She was in dilemma. One side the Tri-Dev was standing in front of her for food so, on the other hand, it was all about her self respect. How can she stand naked in front of anyone except her husband? She thought for a while and after some time, she came up with an idea to transform the Tri-Dev into small babies using her power. A women cannot stand naked in front of any other man except her husband. But a mother can stand naked in front of her children!! She transformed the Tri-Dev into small babies and then fed them naked. The Tri-Devi’s hailed Sati Anusuya’s name. Indeed, she was a women devoted to her husband. Lakshmi, Parvati and Saraswati themselves went to her and told her that it was her test and requested her to return their husbands normal. Sati Anusuya accepted their plea and transformed the Tri-Dev as normal.

“A women’s self respect is in her hands. No matter what the situation is, no matter who stand in front of her. She has the power to protect herself and her dignity!!” ~ Sati Anusuya 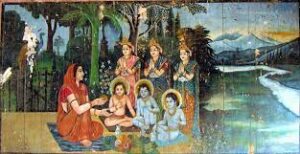 The daughter of Lord Shesha and the wife of brave warrior Meghnad. The goal of Sulochana’s wife was to be with with her husband. Even after death. Her husband also considered her as his strength. You may read the whole story of Sulochana and her Natha in my book Lakshmila – The Eternal Love Story.

But, her husband was his father’s son. He knew that his father was on the path of adharma. He even tried to explain his father. But, his father was blind in his ego. He did not care about anyone except his ego. But, Meghnad followed his dharma and his dharma was to be with his father till the end. Hence, he was killed by his father’s ego. Brave Meghnad was be-headed by the hands of Lakshman. The army of Ram returned Meghnad’s body but, his head was missing. How can Sulochana perform her husband’s last rites without his head? Hence, she decided to face the enemies and get back her husband’s head. Raavan tried to stop her but she didn’t. That time, she was no one, but only her husband’s wife. She knew that the one stopping her was the murder of her husband hence, she cursed Raavan. (What curse? You will get to know in my book.!) Raavan himself was afraid of his daughter-in-law because he knew how strong the love of his son’s wife was. The Raavan who wasn’t afraid of anyone, not even death was afraid of his own daughter-in-law. Was the power of Sati Sulochana’s love too strong?

She had no life without her husband. Her husband was her world and now that her world ended, she too decided to end herself hence, she did Sati by burning herself on her husband’s pyre. She was a Sati by choice.!! The heaven showered flowers to brave Sati Sulochana.

The Sati Pratha is wrong. But, Sati Sulochana was a Sati by choice!! No one forced her. She herself wanted to end her life rather than living a life with the murderers of her husband!!

Indian society won’t ever accept a women cursing her father-in-law hence, the part of Sulochana Sati is usually avoided in the later versions of Ramayan. But, in Valmiki Ramayan, Ramcharitramanas, Kamban Ramayan and Odia Ramayan and Purans Sulochana Sati has been described as an idol wife.

“Fear has no power in front of true love. There is no power greater than true love in this universe. No one can defeat the women who is truly devoted to her husband. I may end my life today by committing Sati. But, my love for my Natha shall remain immortal!!” ~ Sati Sulochana 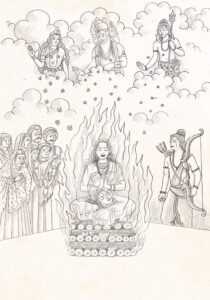 Savitri was the Manas Purti (child created from mind) of the Surya Dev also known as Savitr. Hence, she was known as Savitri. She was adopted by king Aswapati of Madra Kingdom. As Savitri reaches the age of marriage, her father tells her to find a suitable man for herself. She searched for one and found Satyavaan, the son of a blind king Dyumatsena. As soon as she told her wish to her father, Dev Rishi Narad appeared and told her that Satyavaan shall die after one year of her marriage. But, she was so much in love with him that she accepted it and married. She started living in forest along with her husband.

After one year, as predicted, Satyavaan started feeling un easy and layed on his wives lapse. It was the time for Yamraj’s servants to come and take Satyavaan’s soul with them. Savitri follows Yama as they carry the soul away. When Yama try to convince her to turn back, she offers successive formulas of wisdom. First, she praises obedience to dharma, then friendship with the strict, then Yama himself for his just rule, then Yama as King of Dharma, and finally noble conduct with no expectation of return. Impressed at each speech, Yama praises both the content and style of her words and offers any wish, except the life of Satyavaan. She first asks for eyesight and restoration of the kingdom for her father-in-law, then hundred sons to herself and Satyavaan, and then a hundred daughters for herself and Satyavaan. The last two wishes creates a dilemma for Yamraj, as it would indirectly grant the life of Satyavaan. Yamraj grants life to Satyavan and blesses both of them to attain a long life. Satyavaan awakens as though he has been in a deep sleep and returns to his parents along with his wife. Meanwhile, at their home, Dyumatsena regains his eyesight before Savitri and Satyavaan return. Since Satyavaan still does not know what happened, Savitri relays the story to her parents-in-law, husband, and the gathered ascetics.

Women in North India also celebrate by observing a Vat Savitri Vrat for their husband’s long life and recite the tale of Sati Savitri.

“Death is nothing when a women’s devotion towards her husband is true. There is no power greater than love. It can make the dead alive!” ~ Sati Savitri 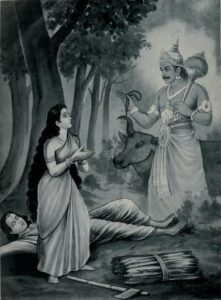 The Maha Sati’s – The Virtuous Wives

One thought on “The Maha Sati’s – The Virtuous Wives”