Hey guys so first of all, wish you a very Happy Naga Panchami. So guys, today is Naga Panchami and how can we forget the tale of our dear Sheshanaag and his wife Ksheera Sagara/Vimala Devi who was named Naga Lakshmi after she married to Sheshanaag. Guys, do you know how Shesha became Lord Vishnu’s best friend? I will tell you.
Shesha was the eldest son of Rishi Kashyapa and his first wife Kadru, one of the daughters of Daksha. Kardu gave birth to thousand snakes, can you imagine and Shesha was the eldest one. After him, Vasuki (the ornament of Lord Shiva), Airavata and Takshaka were born in that order. Most of his brothers were very cruel and selfish where as Shesha was always the piece maker. His father also married his masi Vinatha but, his mother Kadru was always jealous of her sister. Shesha was the most powerful amongst his brothers. His mother always wanted to use him to harm Vinatha who was a very gentle lady. She hated Vinatha to an extent that one day, she had cursed some of them when they had refused to comply with her wishes to wrap themselves round the tail of the celestial horse Uchchashrava to deceive their stepmother Vinatha. Now the snakes were really worried about the consequence of the curse. Shesha, Vasuki refused to her just because they loved their Vinatha maa and she also loved them like her own son Garuda. Yes, we are talking about Pakshi Raaj Garuda, the vehicle of Lord Vishnu. Kadru got angry on them and cursed them. She said “You all are my sons right? I bought you up and you are leaving your mother in trouble. I curse you that whoever disagreed to my order will fall in Jsnamejeya’s sarpyaag and die.” Shesha got vexed with hatred, lust over authority, jealous and other bad human feelings he saw in his mother. He wanted to get rid of all these human feelings .
One day, Shesha got fed up from his mother and his brothers. He decided to leave his family and undertake severe austerities and penance. He lived merely on air and meditated in a number of places, including Gandhamadana, Badrikashrama, Pushkara, Gokarna and the Himalayas. Bramhadev appeared and asked him that why was he meditaing? Shesha opened his eyes and explained him his problem. Bramhadev smiled and said “Narayana. Putra, only unification with Narayana can free us from all these human feelings.” “But Bramhadev, I am a serpant, will he accept my plea?” he said making a sad face. Bramhadev smiled and said “Putra, why are you thinking like that. Narayana is the one who created every thing. You are also a creation of him only then how could he deny your plea? He is the only one who can give you Moksha. Go meditate. He will surely fulfill your plea.” 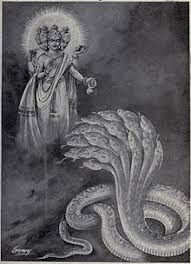 He agreed to him. and started meditating. He left his food and water and meditated for many long years. Then one day finally, Narayana got impressed with him and appeared. “Open your eyes my putra, plea is granted. I am here” said Narayana in his sweet gentle voice. Shesha slowly opened his eyes and saw his Prabhu there. Tears of joy started flowing though is eyes and he cried “Prabhu, I am fed up with my life, my selfish mother and brothers. They are filled with envity and always quarrel among one other for superiority. My mother who should be inspirational to my brothers, who should teach morals to them is on the path of adharma. She is molestating my Vinatha maa. I want to free my self from all these relations. I want to follow the path of dharma. I wish that my mind is always filled with spirituality, goodness and peace.” Narayana smiled and said “Oh dear Shesha, you impressed me. I have never seen a person like you. You are a great soul. I wish every human on this Prithvi could be like you. I am unifying you in myself right now. You will be free from all the manacles of this birth from this moment. You will always serve me in Vaikuntha. You will be my bed. The world hails you as Sheshanaag of Narayana.” “Narayan-Narayan. I got a new life today” Shesha fell on his feet and took his blessings. Narayana picked him up and said “Shesha, I am not over yet. You are much interested in serving me and goodness. Your mind is set on correct dharma. You should do one thing for the human kind. Only people with sympathy like you and the one who wins over all his desires can do this.” “What Prabhu” asked Shesha with a confused look. Narayana gave his mischievous smile and said “Earth because of her presence of mountains, forests, oceans and so many humans could not stable herself. Hold her and stabilize her on you hoods.” Shesha happily accepted his job and from then he is holding all the planets on his hoods, can you imagine all the planets. Such a difficult task but, our dear Shesha does it happily. You know, the main reason of earth quakes is our dear Sheshanaag. Whenever he shifts Earth from his one head to another, earth quakes takes place. 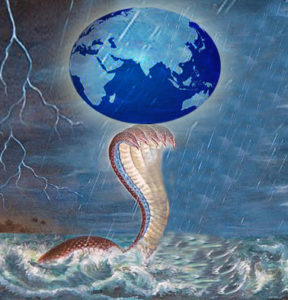 Narayana took him to the Vaikuntha and said “Shesha, you are a gem. I free you from the curse given my Kadru. When the whole world will be destroyed, only you will be the one who will be as it is. You will play a very important role in my every avtar on Prithvi.” He took him to Vaikuntha where Devi Ksheera and Lakshmi gave him a warm welcome.
Lakshmi took a did his aarti along with Ksheera and said “Welcome dear Shesha. From today this is your home and we are your family.” Shesha took her blessings and said “I am blessed maata.” As his eyes fell on Ksheera, the one standing besides Lakshmi most beautiful as she was in white saree, he asked “Mata, who is she?” Lakshmi smiled and said “She is Ksheera, our dear sister who is always there with us.” Shesha gave a confused look and asked “but mata, who is her father and husband? Is she married?” Lakshmi looked at Narayana’s eyes and said “she is a creation of Narayana. She lives here with us and will always live. We are looking for groom for her who dosen’t takes her away from us.” “Didi, let them in. They might be hungry.” blushed Ksheera. Narayana and Shesha entered the most beautiful place of the universe the Vaikuntha and started living their happily. Within a few months only, Shesha fell in love with Ksheera and got married to her. After many years, Ksheera gave birth to their daughter Sulochana.
So, this was the story of Lord Vishnu’s best friend Sheshanaag. Lord Vishnu never considered Shesha as his bhakta, for him he was his best friend, his partner, his brother. 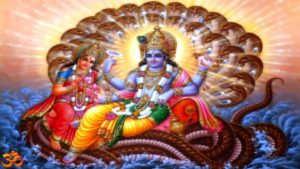 4 thoughts on “Sheshanaag- The Best Friend of Lord Vishnu”

Vishnu Parvati- The Reason Why We Celebrate Raksha Bandhan

Thu Aug 15 , 2019
Hey guys so first of all, wish you a very happy Raksha Bandhan. Raksha Bandhan, a festival dedicated to our dear siblings and also the […] 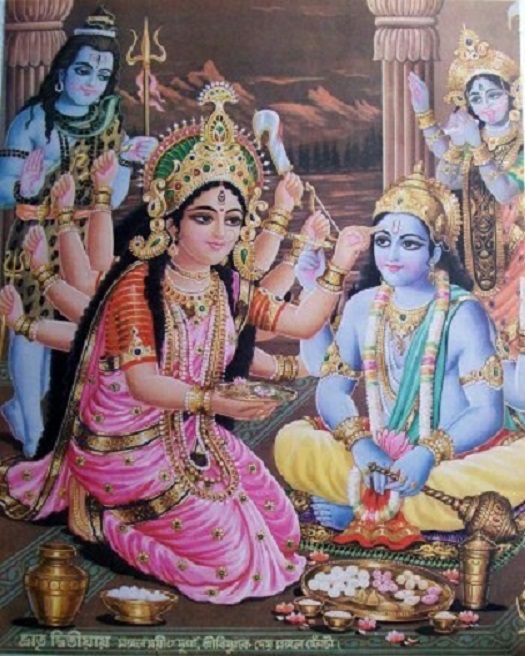