In Hinduism, importance is given to one’s action, karma, dharma and its impact rather than on one’s identity.

In Rukmini’s case, our mythology has only talked about her identity – Rukmini being the incarnation of Mata Maha Lakshmi, it has never highlighted any of her achievements – and for a reason – unlike the births of Sita and Ram whose objectives, besides establishing dharma, were to set examples of ideal wife, husband, mother, ruler and so on, Krishna’s role was to set examples of an ideal lover, devotee, friend, guide, guru and to give mankind the lotus-like words of Gita, and Rukmini’s role was to be his human-consort. One has to understand that this does not imply that she was inferior – it’s just that they incarnated for some specific reasons.

Now to set an example of an ideal lover and a devotee, one needs other side of the coin too, and here comes Radha, an epitome of selfless love, the love which knew no boundaries, no age, no community. It is this devotion which pulled Krishna to play his beautiful flute, and it is the same devotion which drove Radha to the Raas Leela, forgetting her own self. This love, this devotion, this karma, pure as a prayer, a silent meditation, is what makes Radha divine, this is what turns a devotee into God. Radha-Krishna have been a part of poetry, drama, and folklore since time immemorial.

So the world worships Radha to celebrate the bond of love and devotion, one of the paths to realize the Truth mentioned in the Gita. Devi Lakshmi’s incarnation was Rukmini was supposed to be a silent supporter – very important but less conspicuous. And this was by their own design, their own strategy, and their master plan.

There’s no bias between Radha and Rukmini as why one is only worshipped with Krishna. There are many temples that worship Rukmini with Krishna as Rukmini-Dwarikadhish or Rukmini-Vitthal. The rasa involved is different. But both of them are the internal potency or hladini-shakti (internal potency) of Lord Krishna and they are meant to worship with Him.

Moreover, Radha and Rukmini are non-different and we find this statement in Skanda Purana confirming this:

TRANSLATION: Rukmini is in Dwaraka what Radha is in the forest of Vrindavan.

Importance of spiritual shelter by Srimati Radha or Mother Rukmini to the Devotee:

Radha or any of the forms of the spiritual potency of Krishna makes the way for the sincere living entity who is aspiring to render devotional service to Krishna. Krishna explains sincere devotees are always under the protection of His Internal Potency (i.e. Radha, Mother Sita or Rukmini) this in Bhagavad-Gita:

TRANSLATION: O son of Pritha, those who are not deluded, the great souls, are under the protection of the divine nature. They are fully engaged in devotional service because they know me as the Supreme Personality of Godhead, original and inexhaustible.- Bhagavad-Gita 9.13

Also, many a times devotees are attached to a certain form of Lord Krishna and they worship but this is no great issue or some bias. Some wish to worship Radha-Krishna, or Sita-Rama, Lakshmi-Narayana, Lakshmi-Nrismhadeva. But the focus should be sincere service to Lord Krishna. Krishna reciprocates with the devotee accordingly as confirmed in Purusha-Bodhini-Upanishad:

TRANSLATION: “The one Supreme Personality of Godhead is eternally engaged in many, many transcendental forms in relationships with His unalloyed devotees.”
In Laghu-bhagavatamrita (5.383) expounding the above fact:

TRANSLATION: “Just as Radha is dear to Lord Krishna, so her bathing place [Radha-kundah] is dear to Him. She alone is His most beloved of all the Gopis.” – Padma Purana

TRANSLATION: “O Partha, in all the three planetary systems, this earth is especially fortunate, for on earth is the town of Vrindavan. And there the Gopis are especially glorious because among them is My Srimati Radharani.” – Adi Purana

Since she is extremely dear to the Supreme Lord, whichever sincere devotee she recommends Krishna immediately accepts unconditionally.

Radha is ‘NOT’ mentioned in Vedic Scriptures

Sometimes there are lame arguments that the name of Radha is not mentioned in Scriptures, so she is an imaginary figure or a concocted personality by the Bhakti Movement. But this is actually not a fact as she is mentioned, but to avoid unscrupulous people and pretenders, her names are not directly mentioned as it is confidential knowledge. At the same time, there are also direct mentions in Vedic Scriptures.

In many Vedic scriptures Srimati Radharani is described but in Bhagavatam Shukadeva Goswami has tried to hide Her confidential name, nature, and pastimes.

Srimati Radharani is referred to in this verse as kaacit, “a certain Gopi”. To establish that this particular Gopi is, in fact, Radha, Srila Jiva Goswami quotes the following verses from the Agni Purana:

“At dawn, the Gopis inquired from Krishna’s servant, Uddhava, about the Lord’s pastimes and recreation. Only Srimati Radharani, immersed in the thought of Krishna, withdrew Her interest in the talks. Then Radha, who is worshiped by the residents of Her Vrindavan village, spoke up in the midst of her girlfriends. Her words were full of pure transcendental knowledge and expressed the ultimate portion of the Vedas.”

The Brihad-gautamiya-tantra also names Radha as the foremost consort of Lord Krishna:

“The transcendental goddess Srimati Radharani is the direct counterpart of Lord Sri Krishna. She is the central figure for all the goddesses of fortune. She possesses all attractiveness to attract the all-attractive Personality of Godhead. She is the primeval internal potency of the Lord.”

Additional information about Sri Radha is given in the Rig-Parishishta (the supplement to the Rig Veda):

So Srimati Radharani is not a fictional character nor is it a bias of only her being worshipped with Krishna. Different devotees have an attachment to various incarnations of Krishna so they serve Him appropriately.

Once, Satyabhama prided herself about the love Krishna had for her and her grasp over his heart. On one contrived occasion, Deva Rishi Narada arrived in Dwarka and in the course of conversation hinted to Satyabhama that the love that Krishna exhibits towards her is not all that real and in fact, it is Rukmini (the first wife of Krishna) who has real control over his heart. Unable to bear this, Satyabhama challenged Narada to prove it. Narada, with his way with words, tricked her into accepting a Vrata (ritual) where she has to give Krishna away in charity to Narada and reclaim him by giving the weight of Krishna in wealth. Narada lured her into accepting this vrata by telling her that Krishna’s love for her will increase many folds if she succeeds in performing this Tulabharam. He also instigated her ego by hinting that her wealth may not be sufficient to equal the weight of Krishna. With Satyabhama’s ego duly raised, she told Narada that she can mobilize so much wealth that it is a child’s play for her to outweigh Krishna. Narada warned her that if she is not able to do this, Krishna will become his slave to be done with as he pleases.

The scene was soon set for the vrata. Satyabhama gave Krishna away in charity (Dana) in spite of the other wives’ pleadings. Krishna, always the mischievous cowherd, meekly submitted to this drama. After donating Krishna to Narada, Satyabhama arranged for a big scale to be put up and sends with all assurance for her huge treasure of gold and jewelry. All that she has is soon put on the scale, but it didn’t budge. Narada started taunting her and threatening her that if she can’t put enough gold or diamonds, he will be forced to auction Krishna as a slave to someone else. Satyabhama, in frantic panic, swallowed her pride and begged all the other wives to give their jewels. They agreed out of love for Krishna but alas, it was of no use.

Krishna remained a mute witness to all this drama and rubbed salt into the open wounds of Satyabhama’s ego that he has now to become a slave to some cowherd and will have to suffer the separation from his dear wife. Narada suggested to Satyabhama that Rukmini may be able to get her out of the predicament. She finally swallowed her pride and appealed to Rukmini, the devoted first wife of Krishna. Rukmini came and with a prayer to her husband and put a single leaf of the sacred Tulasi on the scale (Tula). Lo and behold, the scales became all at once so heavy that even after removing all the jewels, the scales were weighed down on the side of the Tulasi leaf.

Why is Radha worshiped with Krishna not Rukmini?

One thought on “Why is Radha worshiped with Krishna instead of Rukmini?”

Airavata- The Elephant Of Indra

Fri Aug 7 , 2020
In Hinduism, each of the divine gods and Goddesses have their own animal escorts. These are also called as Vahanas (animal vehicles). The literal meaning […] 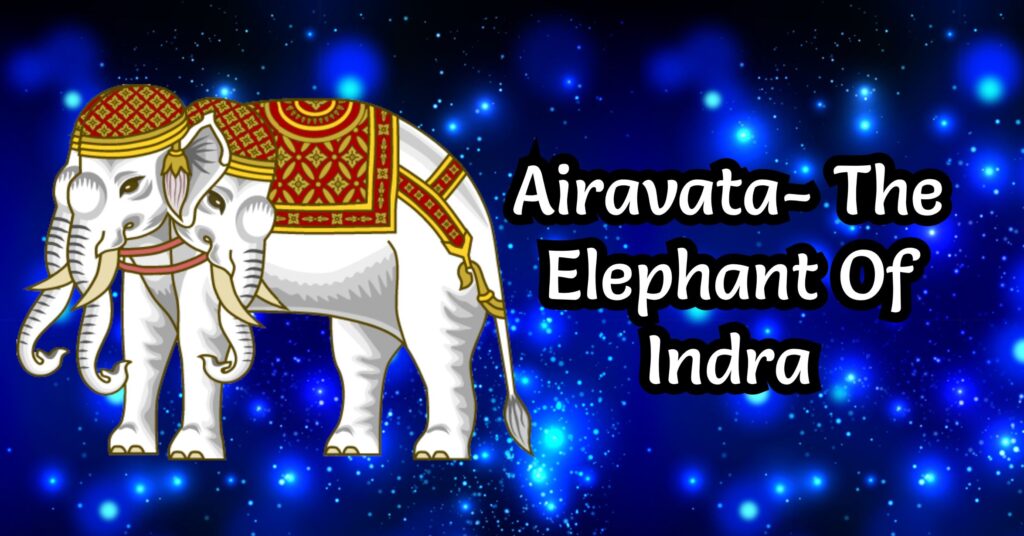